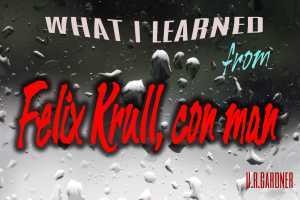 What I learned from Felix Krull, con man

Reading the Thomas Mann novel, The Confessions of Felix Krull, Confidence Man, I had no idea just how much the novel would impact my life. Looking back, I can only smile. But, at the time, with the dreaded ‚greetings‘ letter in hand, there had been nothing whatsoever to smile about.

Back in the dark ages, we still had The Draft–which wouldn’t disappear until the year 2011–and there was no getting round it. Very simple. You received the letter, and you showed up for the physical. Many tried to avoid the inevitable by fleeing to West Berlin–where the government couldn’t touch you–or, by ingesting enough pills and/or controlled substances to make damned sure the status of your health was deemed unfit for service.

In the novel, Thomas Mann has such a scene. However, Felix Krull has another strategy up his sleeve. He doesn’t even try to avoid conscription. Quite the opposite. He goes out of his way to convince the medical officers that he is absolutely fit. And the officers, having seen every trick known, are astonished to find a young man who is eager to serve, ready to throw away his life for his country. If so, the young man must be out of his mind; and, as such, was a liability to his comrades-in-arms!

I read that chapter over and over again, as if studying a how-to book. I had already made up my mind to become an actor (after leaving my sailor-phase behind), and couldn’t wait to show off my theatrical skills. When the day arrived, however, I was striken with an acute case of opening-night jitters–without ever realizing how much this was simply an integral part of being an actor, and which, later in my professional career, I would suffer so often.

I strode into the building like one who has arrived where he has always belonged. The army, yes; that was my world, my destiny. Everything they told me to do, I did officiously, giving my all to make the most positive of impressions. I told them I wanted–I absolutely wanted–to be classified 1A. I couldn’t wait to get my hands on a fighter jet, and machine guns, of course, in order to be a real man, a hero. When they measured my height, I stood tall to a fault, but when they sent me for the urine sample, I slinked to the toilet, locked myself in, and refused to come out. When they came in search of me, they found me on the brink of a nervous breakdown, sobbing: „I can’t…I can’t…I’ve tried, I’ve tried…but nothing comes…“ In order to get their required specimen, they gave me coins for the vending machine–stripped to my underpants, I had no money on me–drink, they ordered. But even after guzzling several sodas, I couldn’t even manage the minimum. At long last, I succeeded, and marching proudly past the row of hanging vials I shoved the first one with my finger, and there followed a magnificent chain reaction, as the entire line of glass tubes clacked musically in time. They threw me out on the spot. C’mon, lighten up, guys!

One of the doctors questioned me about diseases in my family. What could I say? All of us were fit as a fiddle. But I made damn sure he knew all about my need for fighter jets and machine guns and becoming a real man. The eye and ear tests were just like Felix Krull’s. One ear registered the slightest of whispers; the other, alas, had issues. The doctor had to hiss very loudly until I finally answered the first number that came to mind; at other times, I quickly replied before he’d whispered anything. The eye tests, ditto. The doctor sighed, and pulled a pitiful face. And when he asked again about diseases in the family, I couldn’t hold back a moment longer. Father, alcoholic; mother, hysterical; entire family, utter and complete disaster–forgive me, mom and dad, you were the best–and that’s precisely the reason it was important for me to shoot and kill and all that stuff, in order to finally become a man. And…oh yes, there was also tuberculosis in the family, on my mother’s side. I will never forget the compassionate look on his face as he walked me to the door.

The final test had me doing pushups and knee bends. In the meantime I’d reached a state of trembling ecstasy. I’d never done so many pushups in my life–at least 100 of them, I swear–and all to prove what a great guy I was and that all I needed was fighter jets and machine guns. Finally I fell down, exhausted, in a sweat, too weak to get up. The doctor had to help me to my feet, only to have me immediately collapse across his desk. I tried to straighten it up, only to have all his things spill all over the floor. clasped my arms about his knees, and wept, wailing my psychiatrist told me that I had to become a man, and I could only do that in the army.

Your psychiatrist? he asked.

Quickly, I tried to correct myself, but it was too late. And so I confessed, trembling, teeth chattering, sobbing, that I was, yes, under psychiatric care. All of a sudden, the doctor couldn’t wait to get rid of me. He had me half out the door, when I played my last card, screaming: “If you don’t take me, I’m going to kill myself!”

I’d already threatened my psychiatrist that if I had to go into the army, it would be the death of me.

They didn’t even call him. Without more ado, I’d been re-classified. In national emergency, administrative and/or kitchen service only. After having read the letter over to be sure, I let my head fall back, and howled like a wolf. “Pigs! They won’t take me, they won’t even give me a chance!”

My friend elbowed me in the ribs. “Hey! Cool it, stupid. You got what you wanted. The performance is over.”

Well, he was right. And from then on, I never needed a shrink again.

Why am I telling you all this? Simply to demonstrate that literature can actually be good for you. It offers more than art, it offers escape. And I wanted nothing to do with the shadow of collective guilt born of der Fuehrer and his Second World War; and for that, I didn’t need a surfeit of pills, I needed one good dose of art.

And that came courtesy of Thomas Mann. 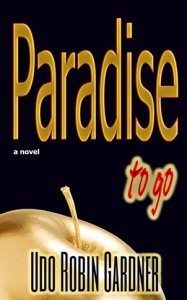